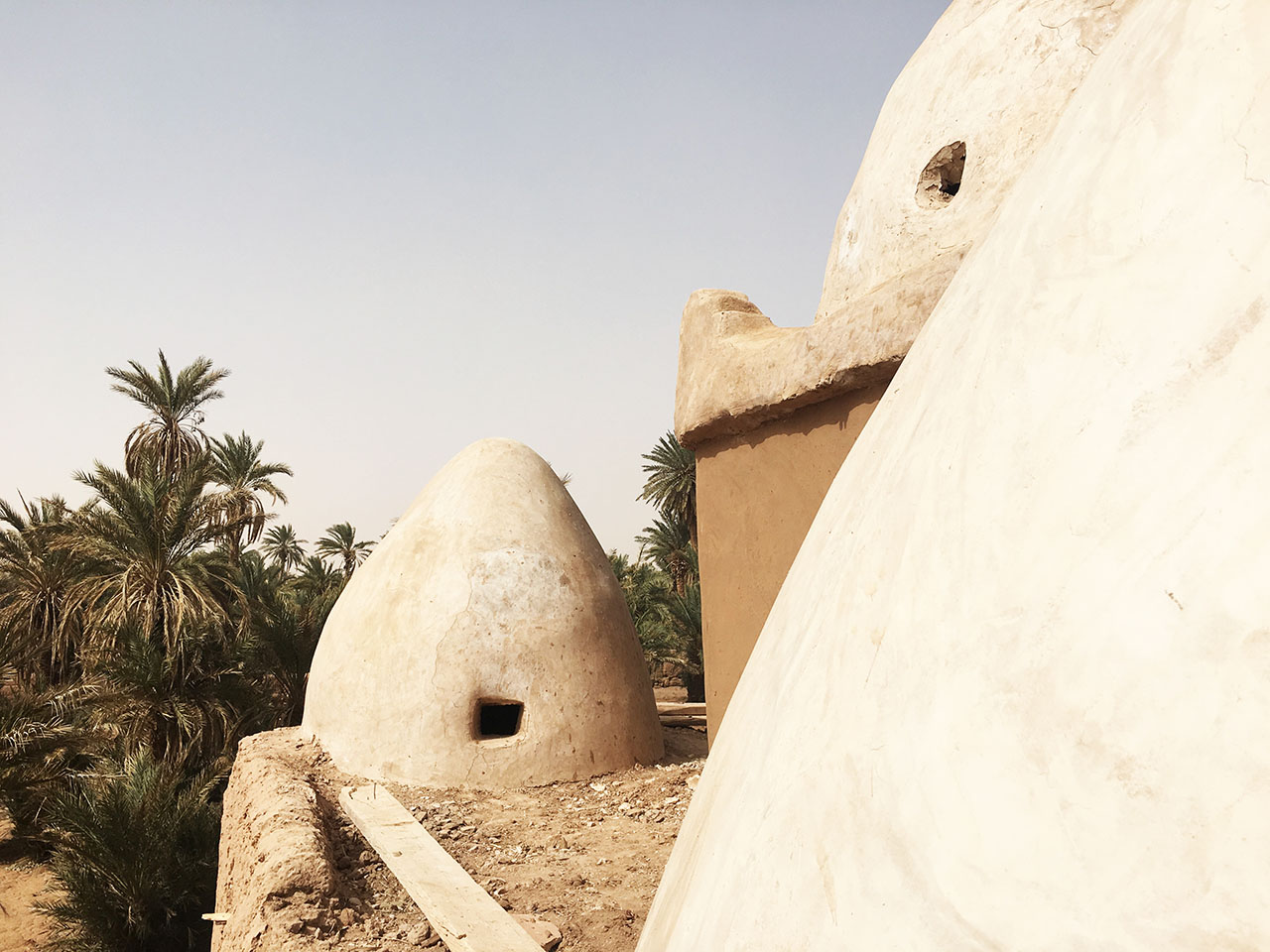 The Sidi Abdullah Khalifa marabout is located in the village of Ouled Yussef, in the M’hamid Oasis in Zagora province, Morocco. It is one of the most singular and beautiful oasis buildings, and is venerated and respected by village residents because it holds the remains of the holy man it is named for.

The restoration of the marabout was done in partnership with the ArCHIAM group from the University of Liverpool.

The marabout is a small building with a square floor plan measuring 7.8 m on each side (15 royal cubits) and covering barely 40 m2, located in the palm grove north of Ouled Yussef. The one-story building is topped by five oval domes. To the west of the building is the cemetery for the holy man’s family members.

You arrive at the marabout through a large south-facing portico, telling us that this is a space that wants to be protected from the outside world. The entrance to the marabout is marked by side moldings which form part of the pointed arch rising above it. The lintel is subtly decorated with small raised arches along the top. The floors inside the marabout are made from rammed earth.

The marabout is built with rammed earth walls that are 53-54 cm thick (one royal cubit) and 5 m high to the cornice (9 royal cubits). Rising above this are the corner domes, and above that the central dome, over the central space where the holy man is buried. The four flat roof sections are made from palm beams or tamarisk branches and a mud layer. The domes are arranged in a simple and irregular pattern. They are corbel vaults made from mud bricks with a lime coating on the outside and an interior diameter of 1.25-1.35 m. In addition to the perimeter load-bearing walls, the building structure consists of four L-shaped buttresses measuring 1 m on each side (2 cubits), which configure and distribute the tiny interior space. These buttresses are made from mud bricks and finished in earth mortar and a lime stucco-like coating. Where the buttresses meet the perimeter load-bearing walls, there are false pointed arches one foot thick under the tamarisk framing beams, which segment the space and give the structure a more slender appearance. The four buttresses are joined by another four false pointed arches which, like the others, rise from corbels in the wall or the buttresses.

The interior of the marabout is finished in a lime stucco-like coating which has blackened from the smoke of the candles placed in the walls to honor the holy man. The space sits in semi-darkness, with the only light entering through the small narrow gaps in the facade or through the tiny openings cut into the domes. At certain times of the year, sunlight enters through these openings and shine down on the tomb of the holy man, enveloping the space in an atmosphere of magic and mysticism.

The documentation work was done during the various trips made by Terrachidia in 2014 and 2015. Subsequently, the damage was assessed in September of 2018 and the works were carried out in February and October of 2019. Taking part in the restoration work were seven masters or maalem, 10 local apprentices, one master of tadelakt lime-based plastering, 38 participants from different countries, three ArCHIAM architects, one photographer, and four Terrachidia architects. Crucial support also came from the M’hamid Commune, the Ouled Yussef tribe, and village families.

The first phase of the work included the demolition of all the framework in the portico and two sections of the marabout’s flat roof. Finishes that were coming loose from their backing or deteriorated were removed from all the facades, and part of the roof parapet at risk of falling was demolished. Special attention was paid to the exterior finishes on the domes, which were particularly rain-damaged.

Some wood beams were reused to restore the framing and other recovered tamarisk beams were also brought in. The bed of plant material on the beams was replaced and the mud layer reinstalled on all the flat roofs, adding one layer of mud around 15-20 cm thick and a final layer with a higher proportion of clay and thatch to ensure watertightness. The connections at the roof and the water spouts, which are always problematic in this type of building, were repaired.

All the facades were touched up with earth mortar and the pointed arch over the entrance door was restored, repairing the decorative relief with mud mortar and finishing it with lime mortar.

Emphasis was placed on the idea of the complex being an “enclosure”, rebuilding missing perimeter walls with rammed earth 1 cubit thick and 1 row high, finished with earth mortar. The grounds inside the enclosure were leveled and palm trees were planted, to help maintain the environment.